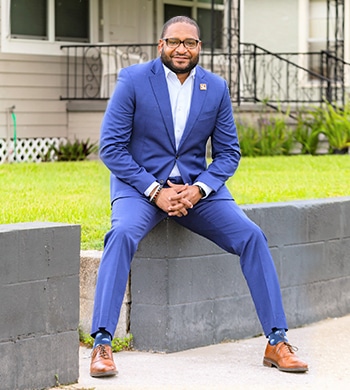 Since joining Abe Brown Ministries (ABM), Inc. first as volunteer and now as President, Robert Blount is quietly transforming the Tampa Bay Community, in service to the “least” among us, through faith-based hands-on leadership and collaboration.

With core focus on prison ministry and reentry services, Robert suggests, “We must create an environment for ‘who-so-ever will’ and accept that everyone won’t. By educating, equipping, and empowering the ‘least of these’ among us, they too can become productive citizens and live spiritually fulfilling self-sufficient lives.”

Robert Blount has been President of Abe Brown Ministries since 2002. With a core focus on prison ministry, reentry services, and criminal justice reform, he continues to quietly transform the Tampa Bay community through his faith-based hands-on leadership and community collaboration.

Under Robert’s leadership, Abe Brown Ministries worked together with the Children’s Board of Hillsborough County, Big Brothers Big Sisters, and Florida Kinship Care Center at University of South Florida to establish Children in Hillsborough of Incarcerated Parents (CHIPS). CHIPS is committed to connecting resources and systems of support to meet the needs of children in Hillsborough County whose parents are incarcerated with a vision of eliminating generational incarceration. The CHIPs platform also helped launch the Family Reunification Video Visitation program between children in the Tampa Bay community and their incarcerated parent.

In 2006, Robert was appointed by Florida Governor Jeb Bush to serve on the Governor’s Ex-offender Task Force where his peers chose him to serve as Vice Chairman. Subsequently, he served on the Florida Department of Corrections Re-entry Advisory Council and on the Hillsborough County Violence Prevention Leadership Council, now known as Safe and Sound.

In addition to his responsibilities as President of Abe Brown Ministries, Robert also serves as Director of Ready4Work-Hillsborough. In September 2014, Robert and Abe Brown Ministries launched the first replication of the nationally-acclaimed Ready4Work program in Hillsborough County. Ready4Work-Hillsborough provides case management, life and job skills training, life-coaching/mentoring, and job placement assistance to citizens returning to the community after incarceration in Florida’s prisons.

The Florida Agricultural and Mechanical University graduate has completed Harvard Business School’s Strategic Perspectives in Non-profit Management Executive Education program. He has been honored by the Tampa Bay Business Journal as a Minority Business Person of the Year Finalist. Robert is a Lifetime Grand Chapter Member of Kappa Alpha Psi Fraternity Incorporated. He is also a recipient of the Tampa Bay Organization of Black Affairs (TOBA) Unsung Hero Award and the Tampa Bay Lightning Hero Award. He is an alumnus of Greater Tampa Chamber of Commerce’s Leadership Tampa program Class of 2009, and is a Board Member of Kid’s Community College.

No posts to show!